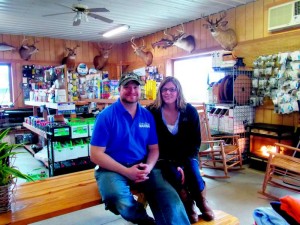 Medina Journal-Register — POINT BREEZE — It was a bit later than normal, but workers at the former Lake Breeze Marina were spotted launching boats last week.

“We normally have the boats in by mid-March, but it was a late spring this year,” said Doug Bennett.

Bennett recently sold Lake Breeze Marina to one of his long-time employees, Gatlen Ernst. The new owner said he is hoping customers experience a seamless transition with the change.

“I’ve been here 10 years and have developed some pretty good customer relationships already,” Ernst said. “Plus most of the faces are the same.” The only changes in staff at the newly named Ernst’s Lake Breeze Marina are an additional mechanic and Ernst’s fiance Danielle Daniels, who will help more on the administrative side of things. Daniels’ family owned Dale’s Market in Albion for a number of years.

Ernst said the new venture has brought a newfound sense of excitement to the upcoming boating and fishing season.

“I’m a little nervous, too, because this is a big step for me,” he admitted.

Still, the marina is located in 2013’s Ultimate Fishing Town, as named by the World Fishing Network.

“I think having that is great for the area, great for publicity,” Ernst said. “It’ll bring in good business for everybody.”

As a first-time business owner, Ernst took a moment to recall starting at the marina 10 years ago.

“My mom worked with Doug’s daughter, and when I came home from college looking for a summer job, Julie said her parents were looking for help,” he said. “I started out here small, doing some general maintenance, but after college I was brought on full time.”

Ernst’s degree from Nazareth College is in business administration, with a concentration in entrepreneurship and marketing. A few years into his full-time employment at the marina, he said he spoke with Bennett about his growing interest in the business.

Medina Journal-Register — Citing a strong working relationship with the Bennetts, Doug and his wife Jan, the marina changed ownership in time for this season.

In the wake of that change, Bennett said he remembered a time when the land used by the marina was his family farm’s heifer patch.

“I was a dairy farmer most of my life,” Bennett said. “We leased out space, but when that didn’t work out how we planned we started building it up. We put up 10 of these storage barns in the last 15 years.”

The barns are a major necessity for the marina as they protect customers’ boats from the harsh Western New York winters.

“A lot of boat owners are probably more fussy about their boats than their cars, because for them their boat is the second largest investment they’ll make,” Bennett explained.

Among the services offered at the marina are boat storage, routine mechanical work like an oil change, cleaning and scrubbing of hulls, waxing of hulls, and full detailing.

“It all depends on what people want,” said Bennett. As for the cleaning, he noted that most of the boats are stored indoors and when they come out in the spring they are normally in good shape.

Ernst noted that the marina is operating at capacity, with about 120 boats.

“We get a lot of repeat customers and a few new ones each year,” he said. “I’m looking forward to working with all of them.”